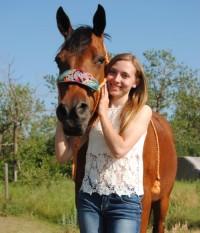 Katelyn is a Registered Veterinary Technologist, who studied at Lakeland College in Vermilion, Alberta. She graduated in June 2016 with honours. In March 2017 she joined the Brandon Hills Vet Clinic team! Katelyn decided to become a part of the Animal Health Field because of her love of animals and passion for doing what is best for them.

Katelyn’s family consists of both people and pets. She is a pet parent to a rescue cat named Frosty and an Australian Shepherd named Mia. She states that she is also a slave to her guinea pig, Turbo, who constantly “wheeks” for food. Katelyn also has a trick pony named Hank the Hunk. Her newest edition to the family is Hatfield her Quarter Horse, who she enjoys riding in her spare time.

Need to get a prescription refill? Order Online