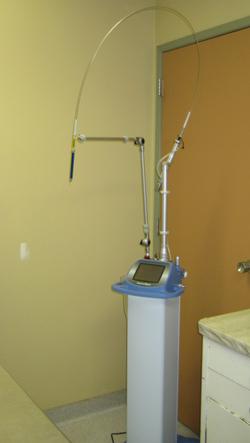 Veterinary laser surgery provides the same benefits to pets that human patients have enjoyed for over thirty years.

When using the surgical laser, only an intense beam of laser light touches the target tissue; resulting in less pain, less bleeding, less infection, less swelling and discomfort after surgery, and the ability to resume normal activities sooner.

The laser can be used instead of a steel scalpel in hundreds of procedures in general surgery, dermatology, ophthalmic surgery and many other specialties. It can be used to make a unique bloodless laser incision, as well as to erase unhealthy tissue (such as tumors) without the excessive loss of blood typical of conventional scalpel based surgery. The laser seals small blood vessels as it cuts – thereby reducing bleeding – which significantly simplifies the surgical procedure and reduces time spent under anesthetic. In addition, laser ablation is so precise that it can selectively remove only a few cells at a time, and the laser beam seals nerve endings so patients are much more comfortable after treatment. The laser beam also kills any bacteria in its path thus reducing the risk of infection, as well as sealing lymphatic vessels resulting in less post-operative swelling.

Need to get a prescription refill? Order Online